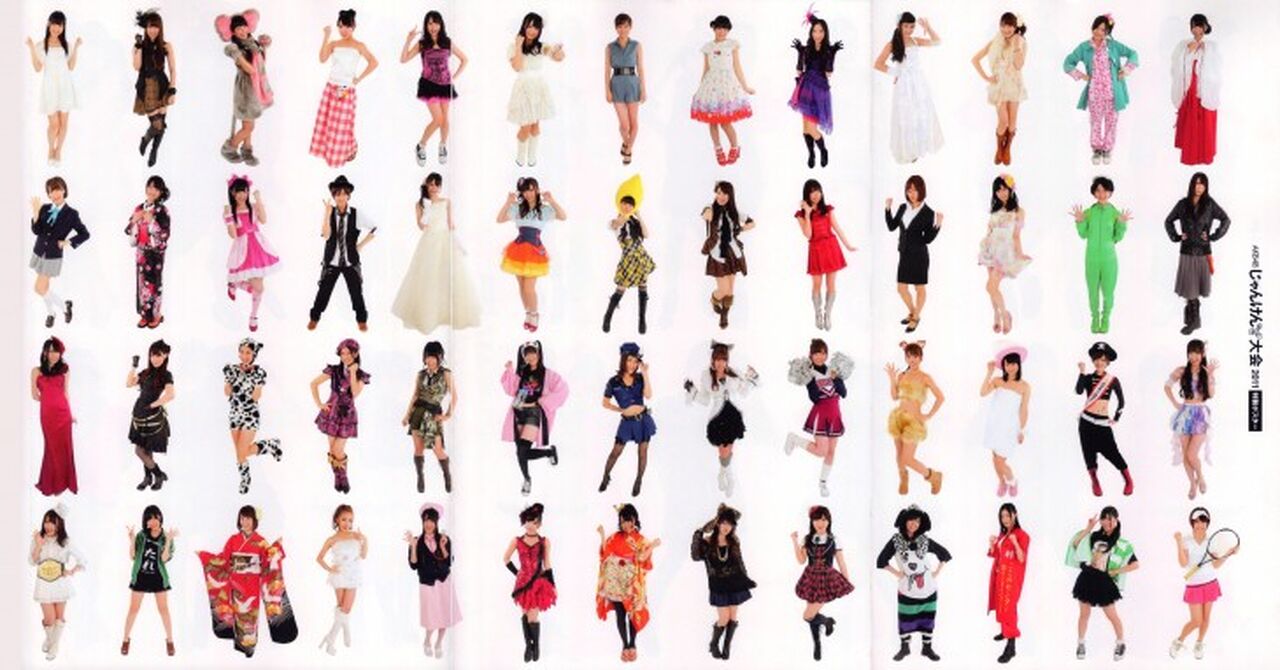 What's on your mind?

If you accidentally clicked onto the Fandom Desktop, and you don't know how to go back, just go to Preferences (it'll show up if you drag your mouse cursor to your profile circle), or just click here: Special:Preferences. Go to "Appearance" and select "Oasis".

She may not be returning to HKT48 Team KIV though she signed an exclusive contract with HYBE (South Korean entertainment company) that will debut a new girl group by the end of this year.

SNH48 project, CGT48 has been cancelled

The shocking news from CGT48 or the extension of Chengtu48 which is a candidate for the new sister group SNH48 has been officially cancelled. This was stated after an insider uploaded a screenshot of Chengdu Siba's company which is a subsidiary of STAR48. It is now known that STAR48 has carried out a deregistration (registration takedown) process for the Chendu Siba company (成都 丝芭 文化 传媒) after being liquidated in early this December. Liquidation is the liquidation of a company by a liquidator and at the same time the issuance of assets and accounts receivable. It can be concluded that the CGT48 idol group project in Chengdu has been completely cancelled. Previously the CGT48 project had been dormant for two years and it became increasingly unclear after SHY48 and CKG48 were announced to be disbanded.Whereas in 2018, STAR48 had recruited staff to be placed in this company. On September 25, 2017, STAR48 announced that it would form CGT48 after collaboration with local governments and local companies there. CGT48 is the fifth SNH48 sister group candidate after CKG48 in Chongqing. CGT48 is named for the abbreviation "Chengtu" based on the Latin writing Wade-Giles instead of "Chengdu" which is the official name of the city that refers to the International Phonetic Alphabet.Wang Zijie, the STAR48 president, once said that investment had been spent around 500 million yuan (approximately 1 trillion) to build this new idol group related to theater and others.

This is similar to MUB48, who was officially announced as MUM48, but renamed to MUB48. They were announced but never debuted.

Can someone add CGT48 on the main page (I don't have permission). I know they are cancelled, but MUB48 is also on the page. So can they be added by "Disbanded or inactive SNH48 Group"? Idk where to find the logo, but maybe someone can. I already created a page about CGT48, so that can be linked to it. You can link this article to it. I will also create CGT48 Members (they don't have members, but I will write a similar post to MUB48). The logo is a purple logo. It's a darker shade of purple.

Is this the hourglass of High Tension? 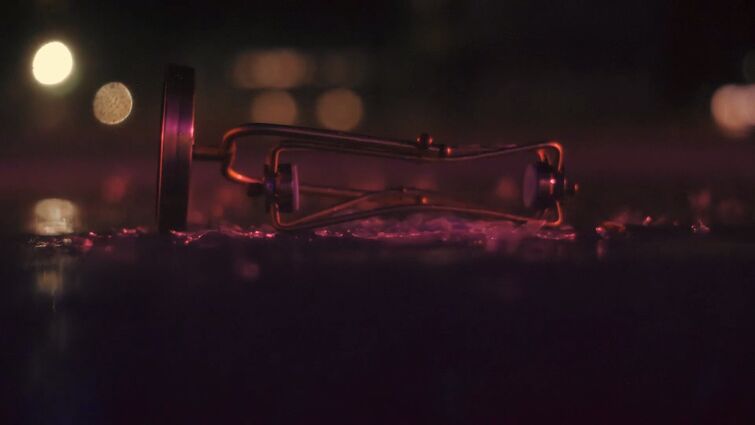 I found a page that was made last April 2020 that is full of malice, With all the contribution inflation on the past months, I guess I missed that one. But I still managed to find it, haha. Even if it was late, I blocked the user indefinitely, so they won't try it again. I actually found a couple more, but I'm still waiting for a response from the one that made those (it's a different culprit). So, in short, if you find that <pagename expunged> in the history list, don't be afraid, I just deleted that thing and prevented anyone to revive it, aside from admins...which probably won't revive it unless anything named like that becomes a single or drama related to our wiki.

I would like to remind each and everyone to try and avoid copying from Wiki48.

On that note, I wish for everyone to help in contributing to Wanted Pages/Red Links, because we have more than a thousand of them currently. And I'm not REALLY blaming it on those who copied from Wiki48...REALLY... 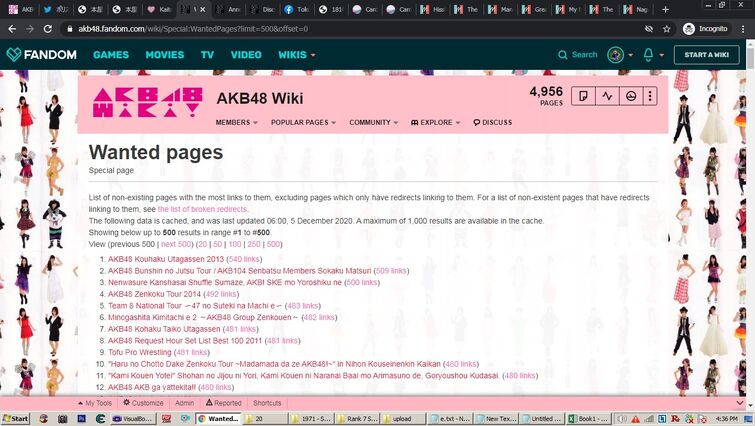 Well, that's all. I hope you keep helping in this wiki even after I, or another admin decides to delete the badges. Not that I really plan on deleting it right now, but in the far future, I might. And it's not that I'm suspecting it to be one of the causes of the sudden inflation of contributors.

Hi! I’m new here and I’m not the biggest akb48 fan (yet!) but I’m trying to listen to them more. I want to get better at Japanese and I do like the akb48 songs I listen to. I just have no idea where to start so can somebody please help me?

Sorry if this goes against the guidelines.

So, could someone tell me the mv pairings for no way man? i really liked that senbatsu but since i'm a new fan i really can't tell most members apart (except for izone members, juri, miru and yui oguri) so i'd be really thankful if someone could tell me who is with who in the scenes where there's pairings and a trio, thanks.

Also, does someone know if there's a page or channel or something where there's mvs/caps labeled with members names? i've seen it done with kpop mvs but not with akb48 videos despite digging, thanks!

I'm one of the users who spends the time researching and translating things to include on those wiki pages. Yet nearly all the Sakamichi pages are exactly the same between here and Wiki48. And I notice when I google members and I see the results pulling up the exact same phrases (including Japanese ones) between both pages.

It's really not that hard to find your own separate information. It's probably less effort that copying and pasting everything over and over.

Someone already made a post about this further down but I hope that whoever is doing this for the Sakamichi groups notices and stops, AND removes the copied info.

As I've almost completed all trainee pages on the chuang 2020 wiki, I'm gonna try work on images again. Currently looking into creating members image categories which then will link to either the groups image category or teams/graduated category.

This is how I made it on the J-Pop wiki which seems to have make it more stabile, feel free to contact me if you wish to help.

She got the coronavirus. pls update her profile and page.

Some of you might've just come here with intention of just copying from Wiki48 and pasting it here. We've had a run-in with one/two Wiki48 supporter in the past already (''click here'') so please avoid that if necessary. You should also check if we already have a corresponding page that is equal (if not the same) as the ones they have.

Here are some examples:

We have differences, which makes our wiki projects unique from each other. So please don't just edit because you can just copy something from others. Please do your part of the research.

Does anyone know how many (and what are their names) AKB48 official documentaries are?

I've only watched No flower without rain, and have my hands on others (a total of 7) but I would like to know if there are more.

Is Hirajima Natsumi Center of MERM4ID (Seiyuu unit from D4DJ) is the same former member of AKB48? i'm asking cause i only can find similarities but nothing official...

I know it's frustrating because the Template:Color is only working for limited templates, but I'm trying out a new one. The prototype I have is Template:PortableSTU48Infobox and is still in the works. For now, I've locked the color template so that it won't cause more despair. I'm also sorry for the less time I contribute...I had to retrieve several images for the NogiKoi Fandom, and I'm still only able to retrieve 10% of the current total images from the game.

It's not the first Portable Infobox I tried to produce. I also made Portable Infoboxes in NogiKoi Fandom and Majisuka Fandom. This is the third Fandom that I'll be trying to make one. I'll admit that changing the header background color will be the most challenging currently.

Anyone know how to add color to this template?