Beginner's Music Clip was premiered during the Janken Senbatsu Tournament. As described by fans who attended the event, the PV featured a survival video game plot, where all the girls were connected to a virtual reality where they fought against each other killing themselves with different irealist weapons such as gigant Chupa Chup.

Near the end of the PV, only Maeda Atsuko and Oshima Yuko are left. While fighting against the Stone Recordes, Stone stabs Maeda's hand against a wall, making it impossible for her to move. Oshima fires at the arm that's holding Maeda. Oshima smiles for just two seconds and is killed from the Stone Recordes.

When she regains consciousness, her hand starts to hurt and blood comes out of it while she screams in pain for several seconds. In this situation, Maeda decides to cut her whole arm to keep fighting, and, for some unexplained reason, her real self is disconnected from the virtual reality game while still playing (meaning she was still alive in the game).

When she cuts her whole arm off, she changes her arm to a sword and stabs the Stone Recordes. At the end, Matsui Jurina appeared to help Maeda.

This PV was aired again in the Tokyo Aki Matsuri, where a KING RECORDS Representative said, "Maybe this will be the last time we'll show the PV to an open public," claiming that the PV is "too strong visually" and that Dance Shot and Making of footage was going to be used to make a new version to use on TV and to include in the DVD of the Single.

This created a controversy in the AKB48 fandom. Many complained that they wanted to see the real PV, and some days later AKB48's KING RECORDS official website updated with a notice that the original PV was going to be released only through Recochuku. They also officially confirmed that the version included in the DVD of the single was going to be the censored clip. This was the first time a an AKB48 music clip was censored. Akimoto Yasushi commented, "I thought we made an splendid creation," and later explained that it was 100% a KING RECORDS decision to censor the PV. 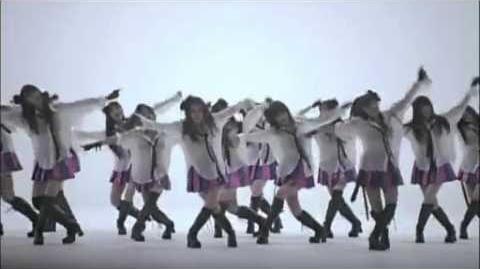