Devi Kinal Putri is the headmistress of JKT48's Academy and the JKT48's Assistant General Manager. Previously, she was a member of JKT48's Team J. She was also the bassist of JKT48 Band. 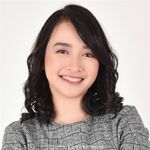 RIVER (2013)
Retrieved from "https://akb48.fandom.com/wiki/Devi_Kinal_Putri?oldid=113305"
Community content is available under CC-BY-SA unless otherwise noted.