Hitomi Kotone was a member of AKB48's Team 8 and Team A.

A6 Revival (Mokugekisha)
Ude wo Kunde
Saboten to Gold Rush 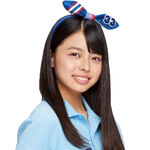