SHOWROOM
Hoshino Minami is a member of Nogizaka46's 1st Generation. She announced her graduation on December 3, 2021, and will officially graduate on February 12, 2022. 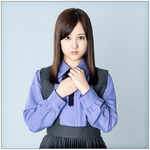