Kikuchi Ayaka was a member of AKB48's Team A. She was also a member of Watarirouka Hashiritai 7.

In April, she debuted as one of the newly formed Team B members

In January, she was selected to be a Senbatsu member for Romance, Irane

In April, she signed to the agency OgiPro

In July, Kikuchi was caught in a scandal, and ultimately got fired in August.

Promoted to Team K in August 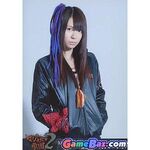