Kosaka Nao is a member of Hinatazaka46's 2nd Generation. She is a "Seventeen" exclusive model. 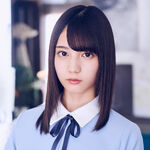