Li YiTong was a member of SNH48's Team HII. She is now on a solo career and has her own studio, affiliated with STAR48. 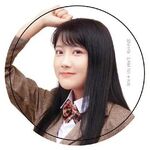