Sato Amina was a member of AKB48's Team K, formerly from Team B and originally from Team A. She graduated to pursue her dream of becoming a voice actress.

B5 (Theater no Megami) 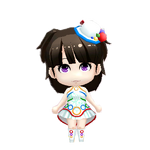