Takahashi Juri was the captain of AKB48's Team B. She is now affiliated with Woollim Entertainment in Korea. 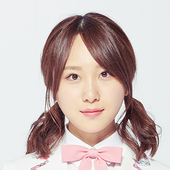