Takeuchi Miyu was a member of AKB48's Team B. She is now a member of K-Pop group Mystic Rookies.

41 (Boku no Taiyou)
Higurashi no Koi 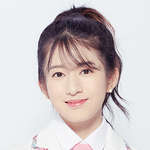