Tani Yuri (谷優里  Tani Yuri?) is a member of AKB48's Team 8 representing Hiroshima Prefecture. She announced her graduation May 5, 2017. Her graduation ceremony will be on May, 28th and the last handshake event on June, 24th. 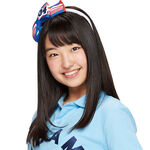 Debut
Retrieved from "https://akb48.fandom.com/wiki/Tani_Yuri?oldid=63752"
Community content is available under CC-BY-SA unless otherwise noted.