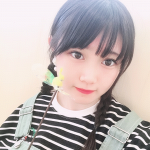 Kica joined the AKB48 Wiki on June 13, 2012 for the sole purpose of contacting an administrator of the Hello! Project Wiki after she had been accidentally blocked.

Kica's interest in J-Pop started while she was watching Sailor Moon and the live action of that anime. J-Pop group Buono! had recorded the ending themes for the anime she had just watched before, Shugo Chara!, and a friend told her this and showed her "Natsu DAKARA!" which was a new release of the group. Remembering the appearance of one of their music videos being featured on the anime, she went back through other music videos of Buono!.

On September 26, Peachygotit-Kica created a webs.com account and her nickname Kica.

On November 24, Kica opened her blog, peachygotit24, and her webs.com site became inactive.

On November 13, Kica joined the Hello! Project Wiki, and the Shugo Chara! Wiki.

On June 13, Kica joined the AKB48 Wiki for the sole purpose of contacting the administrator of the Hello! Project Wiki after being blocked accidentally from the said Wiki. After a conversation, she left the Wiki, not being a fan of AKB48.

Also in June, Kica changed her fanfiction.net username from "Peachygotit-Kica" to WinnieCocoaFlip.

On July 15, Kica watched a video of Sashihara Rino with Buono! and other artists performing Heavy Rotation. This is the first time ever that she watched something AKB48-related.

On August 19, Kica finally decided to read about the AKB48-related groups, and made her first edit, a grammatical error on the Eguchi Aimi page. She also filled out her profile.

On September 26, she saw a video of AKB48 performing for the first time (aside from Sashihara Rino's performance Heavy Rotation featuring Buono! and other performers), a performance of Morning Musume's KoiING by Kojima Haruna and Kashiwagi Yuki.

Retrieved from "https://akb48.fandom.com/wiki/User:Peachygotit-Kica?oldid=5752"
Community content is available under CC-BY-SA unless otherwise noted.