Watanabe Mayu was a former member of AKB48's Team B.

B5 (Theatre no Megami)
Hatsukoi yo, Konnichiwa 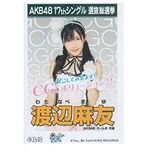