AKB48 Wiki
Register
Don't have an account?
Sign In
Advertisement
in: Members born in Heisei Period, 2000 Births, May Births,
and 10 more

Yoda Yuki is a member of Nogizaka46's 3rd Generation. She is a "MAQUIA" regular model and "bis" exclusive model. 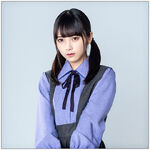