SHOWROOM
Yoshikawa Nanase is a member of AKB48's Team 8 and Team 4. 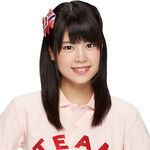